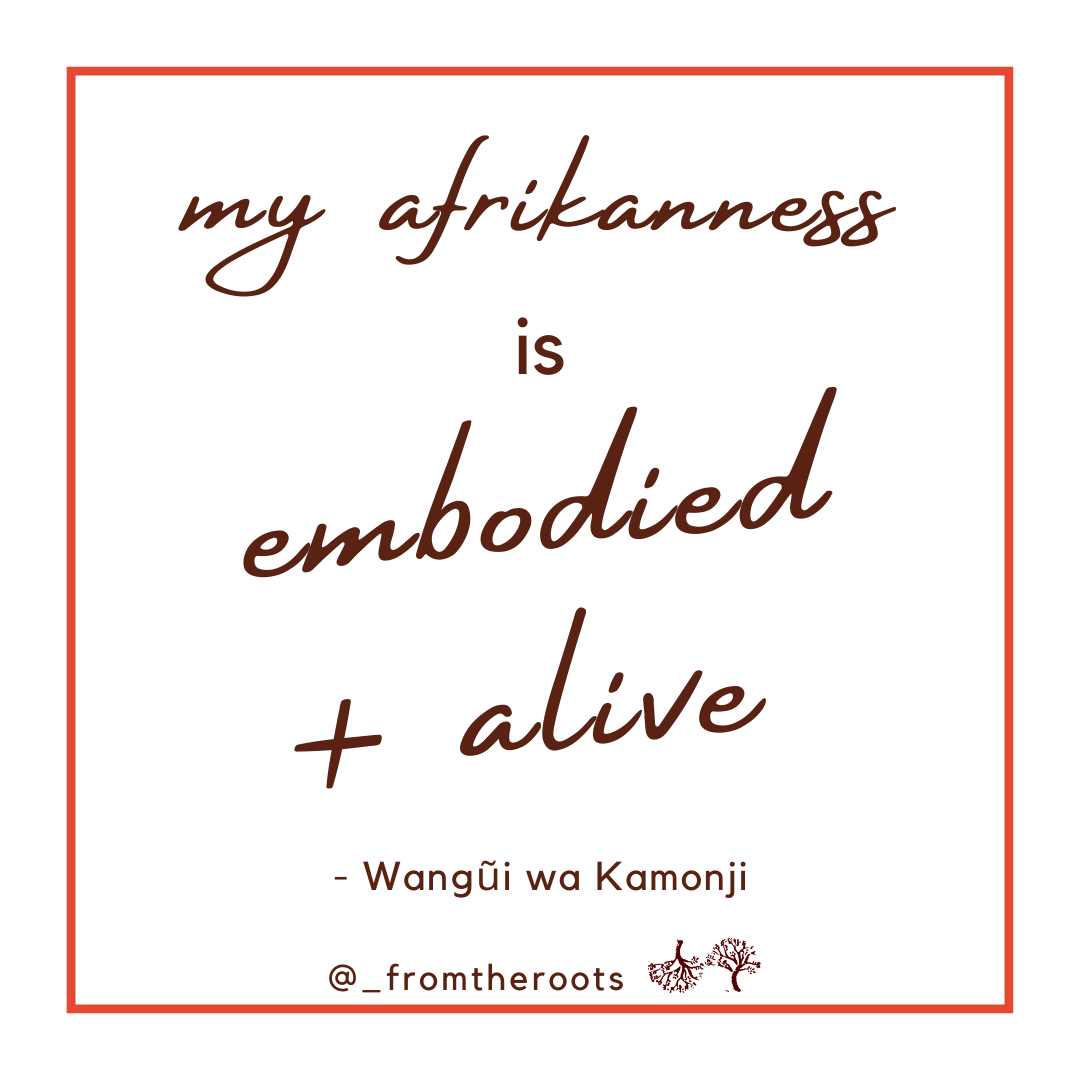 When did you realise you were Afrikan? What does it mean to you?

If you’re like me and grew up in an Afrikan country, you may not have realised your Afrikanness early on – you may not have had a reason to. Growing up in my small town outside of Nairobi, Afrika did not have as much salience as my neighbourhood and town. In honesty, even Nairobi was an excessively huge thing to grasp while I was still young. Never mind that I could identify and name all Afrikan countries and their capital cities on a map from the age of 4. It still didn’t mean anything to me. I had information, but information is not knowledge.

My consciousness and embodiment of Afrika and my Afrikanness would come later. After I left the continent to study abroad. There I shared daily life with the other members of the African Students Association at my school. Finally there was a delicious texture to Afrikanness. I could imagine and empathise with life lived in places I had never been to through the stories we shared. I would travel through my taste-buds into kelewele, redred, kapenta, mulawa, misr wot, groundnut stew, baobab fruit, bissap and so on. And be inspired by style, colours and clothes including learning to wrap my head from West Afrikan sisters.

Afrika was also present in the misconceptions, the stereotypes, the things passed out as “compliments” which were anything BUT! The lazy use of Afrika as poster child or thought experiment for everything wrong in this world in classes.

Encountering these 2 sides of Afrika pulled me in different directions. It could have been easy to react to the stereotypes and negative views, and adamantly insist that Afrika was actually great doing better than Western countries on their own metrics, i.e. insist on the opposite being true. Some version of “actually country X has a growth rate of 7%”, “actually country Z has a more progressive constitution”, “actually….” which often showed up in our evening conversations around a plate of jollof [just as a by the way, Ghanaian jollof, that is all]. Or I could have shrugged it off and kept moving. But I wanted something more than sapping my energy in counter-speaking that may never land, or ignoring the existence of the stereotypes.

It’s clear in various forms of media today that young people from the continent are (more and more) aware of the negative ways the continent has been and still is portrayed and conceived of by the rest of the world. We are tired of this and are doing things to challenge the misperceptions.

But there can be something too easy in the content of this “Africa Rising” wave. It brings up the rock and hard place of Afro-pessimism and Afro-optimism. These are brands of the same thing. They have the same foundation in using foreign visions, ideals and metrics to assess Afrika. They both don’t see what is, and are stuck in reaction to one another. One insisting all is bad and ignoring everything else, the other that all is great and hiding everything else.

My spirit was not at peace with the pessimism, but I didn’t always know enough to say much different. I also was not fully resonating with the optimism, because I knew the realities I was coming from that were at odds with the photo-ready optimism. What was it grounded in? And below the great optics, was it actually offering anything different to the foundations of the pessimist world, or only stuck in a race to measure up to foreign standards?

I put my energy into a journey of inquiry. My journey invited me to look deeper than what is immediately visible, or easily consummable in a media-friendly “Afrika is as great as you” wave. It invited me into a questioning to find out what exactly the descriptive Afrikan means for me, and to determine what about the hegemonic discourse on the continent I didn’t agree with and why, and how then I would respond.

For me to claim Afrika in her fullness, Afrika had to mean something.

My responses were fundamentally about me – not about the rest of the world. They were about redefining, and redesigning my life to be in line with the aliveness I was discovering Afrika to be. I sought stories from other countries in this continent. I began to educate myself about matters that affect countries outside of my own on the continent through the news, books, music, etc. I began to speak up about issues in class, with friends, on blogs, in dance and poetry, etc. I reclaimed and reimagined ideals of beauty outside of Western ones in my dressing. My natural hair journey deserves a series unto itself because it was fundamentally tied to my journey to Afrikan spirituality.

I now identify as Afrikan – but not necessarily for the reasons that others might identify me as the same – which are the reasons that I at first resisted the definition. I learnt to make space for my own narrative of what being Afrikan is and means and entails.

I love how Ṣoyinka speaks about Tigritude (in the Negritude-Tigritude debates). He says, a tiger does not stand in the jungle and say I am a tiger, beating it’s chest – it does what a tiger is supposed to do – so that if you pass by and see a dead antelope, you say “some tigritude happened here“.

How I reconciled Afrikanness beyond the surface pessimism-optimism, the curiosity, the fascination, the deliciousness, the colours, which is to say, how I embody Afrika, is to get to the roots, and then live from the roots. Reconstruct life from the roots.

The evolution of my journey is that my Afrikanness IS. Without being in face to face confrontation and toe to toe matches with the people and spaces that claim it isn’t, and without waiting for affirmation from these. My Afrikanness is alive and embodied.

My Afrikanness is about us seeing ourselves at our core. Not about making the people who unsee us, open their eyes. They may or they may not. I am not waiting. Some Afrikanness happened here and continues to.

So tell me, what does Afrikanness mean to you?

Some people have issues with being considered ambassadors or representatives of places or groups. The fact you are from one ethnic group or one part of a country or continent doesn’t mean that you are representative of the whole. I get that. There’s also the tension that, yes you are not representative of the whole, but you are part of the whole so you still count. It’s a mixed bag this “ambassador” thing. Not everyone wants to be one. It can sap your energy to be one depending on where and with whom. There are times when you honestly cannot be one. Not everyone should be considered one inherently…

My way of being with this mixed bag is that I choose to take up the task of being a good ambassador for all the things I identify as. Even though in myself I am not representative of the whole, I am actively engaging with everything that that whole is, so that if I need to I can speak about the whole while recognising that there are a lot of things that I still don’t know, and being humble and honest about that. And honouring and being in gratitude for all the ways and people I have learnt (from).